Invest money in real estate with the highest return rate

Start to invest money in our Real Estate projects. Get the highest return rate from the market. We try to help you to earn the most possible return from your investment.

Thank you for your visit to our website. We make you profit starting from today. Get a 300$ gift card as a thank you for contacting us. Complete the form to get a call from us. Your 300$ bonus will be paid with your  first return from your invested money in any of our projects.

Leave your contact details to receive 300$ bonus. Additionally, you will get a free consultation how to make you profits from your investment.

Who we are and what we do

Estate Money Today is an investment management company. It invests in the residential sector of the Chicago real estate market.

We provide many years HVAC Heating & Air Conditioning. We provide Plumbing, Electrical and construction services. We decided to start fix & flip investment projects. We know how to develop any house from our strong experience. It’s time to diversify our focus. We started to create an investment community who wants to make money from real estate. We invite you to our development website. You will understand our professional approach to the development process. You can rely on us for any development projects or investments. Visit our website

Your benefits to invest with Estate Money Today​

We pay investors the average market return rate for their investment. Send us your personal requirements for your investment to analyze and to make a decision to work with you.

Our goal is to assist our clients to passively invest in the profitable real estate projects. Our turnkey investment system allows you to simply invest and profit while our team does all the work. We specialize in creating high yielding income for our investors.

Investors as a Capital Partners

Join our partnering for profit program. We will handle the entire process and split the profits with our capital partners! Investors will have a transparent process of fix & flip business. Just send us a request for more information.

Investors can join our mixed partnering business model. We will handle the entire process and split the profits with our capital partners by our business deal! Meantime, investors will earn passive income as well. Investors will have a transparent process of fix & flip and fix & hold business. Just send us a request for more information.

Benefits to invest in Real Estate by assets comparison 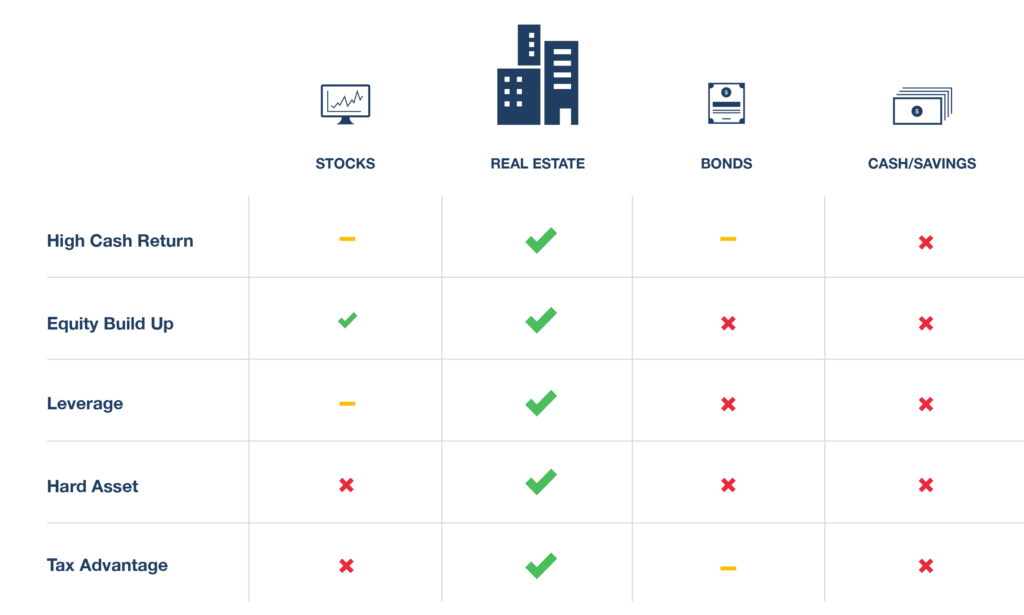 Real estate is one of the best forms of wealth generation. You can constantly rent it out to people and rest assured that the property belongs to you. Choosing the right property is crucial here because if it is close to an IT hub, you can be assured of IT professionals hounding for a good place to stay.

In the event of a financial crisis, your property is the best safety net. You can sell it or use it to generate an income. The property will never be a bad investment. The value will increase and also be a place for you to return to whenever the situation calls. Financial security is very important when investing in real estate.

As time goes on, the property is the one thing that doesn’t depreciate in value. The reason is the growth in infrastructure and the limitation on the amount of space for people to live. Every day, more and more people are looking for housing. This allows you to increase your rent and the value of your property.

Keeping your property in check is a one-time thing. You can set up utilities and amenities for tenants. As a result you can maintain your property once a year if needed. This makes it easy to generate income. You don’t have a problem of constantly looking at your property. And as it is your property, you can design and set it up according to your needs.

6 Celebrity millionaires from Hollywood who also invest in real estate

The Titanic-Great Gatsby-Wolf of Wall Street star has made a fortune acquiring various properties over the years. This real estate investor definitely knows how to maximise on his capital growth. Back in 2016, he listed his oceanfront Malibu property for $10.95 million (nearly seven times more than what he paid for it 20 years earlier). The actor has also bought and sold various properties in New York, Hollywood, Palm Springs and The Hamptons.

Mr DiCaprio’s Palm Springs property 432 Hermosa is a currently offered as a short-term rental, with daily rates starting from $3,750 per night. Great rental yield, Leo! In 2005, DiCaprio also bought an entire island off the coast of Belize for $1.75 million, on which he is developing an eco-resort set to open very soon. With this development project, the passionate environmentalist plans to protect the small island and its ecosystem. Now that’s a sustainable real estate investment, wouldn’t you say?

Before he became the Terminator and the Governor of California, Schwarzenegger financed his career as an  actor by investing wisely into real estate. Arnold’s pre-acting fortune was made in real estate. He would invest the money he’d make as a weighlifter to purchase multifamily real estate (apartment buildings). His passive income from real estate also led him to further finance the travel and diet expenses associated with his bodybuilding career, winning him 5 Mr. Universe and 7 Mr. Olympia titles.

Mr Schwarzenegger was a successful real estate mogul before ever getting to Hollywood or into politics. Real estate was the foundation of his success. In the 1970s Schwarzenegger put a down payment on an apartment building and he quickly started earning profit with both rental yield and capital growth. “Buildings that I would buy for $500K within the year were $800K and I put only maybe $100K down, so you made 300% on your money.” (extract from Tools of Titans by Tim Ferriss)

Brad Pitt and his ex-wife Angelina Jolie were (and kind of still are) a real estate power couple. Together, they own the impressive Château Miraval in France. The Hollywood couple bought the property in 2008 for a cool €45 million (about $67 million), and had their wedding there later in 2014. Château Miraval isn’t just a majestic manor house, it is also an income-generating estate producing wine and extra virgin olive oil .

Brad Pitt’s (and Angelina’s) impressive real estate portfolio also includes various properties in New Orleans, New York, Los Angeles, Santa Barbara and Mallorca, Spain. As well as owning all these properties, Pitt has also converted and developed properties in Los Feliz and Santa Barbara which he purchased before meeting Angelina. The actor’s divorce will surely result in the sale of some of his properties, yet it’s safe to say that he will benefit from the capital growth and the properties’ provenance.

This 20-year-old celebrity comes from the notorious Kardashian-Jenner clan, known for their reality TV show Keeping Up with the Kardashians. The entire family is also well-known for their high-profile investments in real estate. Without exception, the soon-to-be youngest billionaire Kylie has amassed a significant amount of her fortune from flipping properties. Kylie Jenner has already owned several California homes. She purchased her first home in Calabasas when she was only 17, for $2.7 million.

Jenner didn’t stop there. Since venturing into real estate she has bought and sold 3 more homes in Hidden Hills for $6 million, $5.4 million, and $12 million. The Kardashian-Jenner family are also known for their passion towards interior design, renovating and remodelling their properties before selling them for profits starting from $1 million. The young makeup mogul just recently flipped a home and sold a vacant plot for $12 million (making over 700K profit in just two years).

The Godfather-Casino actor Robert De Niro has chosen to invest his money in commercial real estate. As well as owning private real estate in New York and London, De Niro has been invested in various commercial properties, located in some of the most prestigious addresses around the world. The savvy businessman has a hotel resort project on the island of Barbuda, and co-owns Nobu restaurants.

In fact, he was the one who inspired celebrity chef Nobu Matsuhisa to launch the Japanese restaurant empire, opening the first New York restaurant in 1994. De Niro was such a fan of Matsuhisa’s early restaurants in the late 1980s that he became a business partner in the Nobu chain. The restaurants’ prime commercial real estate is located in places like New York, Los Angeles, London, Dubai, Moscow, Monte Carlo and Marbella.

Tom Ford is a man of many talents. He’s mostly known as a fashion designer, but has also excelled as a film director and eight-figure real estate investor. Back in 2016, Mr Ford paid $38.75 million for his Hollywood estate in Holmby Hills, which belonged to the late Betsy Bloomingdale, an American socialite and philanthropist. Ford managed to negotiate the price down from $55 million, scoring himself an impressive “bargain” property. After all, negotiation is key when investing in real estate.

The creative mogul has also reportedly listed his Cerro Pelon Ranch near Santa Fe, New Mexico for $75 million. The ultramodern ranch has breathtaking views, equestrian facilities as well as an air strip and airplane hangar. The property also generates an attractive income from film projects with its own old western movie set, which has been featured in movies like “Cowboys and Aliens”and “Wild, Wild West” starring Will Smith.